Recently I did something I don’t usually do.

I went to a coffee shop and sat there reading the Daily Mail … then I hear a voice: “I’ve not heard from you in over a year!”

As I turn around it’s somebody I’ve known as long as I can remember. He ventures over.

We start talking and, forget a year, it turns out it’s actually nearly ten years since we chatted properly and had a catch up.

As we sit and reminisce we talk about when we were at school and how it wasn’t a pleasant time, as he was bullied.

I once remember at least nine of them teaming up and doing a good number on him.

They cornered him in the locker room and surrounded him before sending him to the floor and punching and kicking him.

He ended up being taken to hospital.

But he came back to school the following week and showed no fear.

We laughed too as we remembered, in our leaver’s books, we had written “Here’s to a clean slate”.

We could never have imagined how prophetic that was.

Around six to twelve months after leaving school I remember him getting a job at one of the toughest,  roughest bars in the area.

Probably like many, I was shocked at the time and like his family and other friends tried to talk him out of taking the job.

It was worse than the bar in Road House, made it look like  Disney World!

I asked him if he could remember when he went from the kid who was bullied, to the hardman people now respected. And the bullies feared.

I had heard the stories from other people, but never from my friend himself.

He told me quite seriously that he’s never hurt anyone that didn’t deserve it.

Here is the story of the birth of a hardman:

He tells me how he got offered the job on a trial basis, Friday and Saturday nights.

He was 16 nearly 17 and from what I can remember wouldn’t say boo to a goose. With his permission I recorded the conversation on my phone and here it is verbatim.

“I was on my second shift cleaning glasses at the end of the bar when some young up-and-coming lad  shouted “Hey, get me a beer now”.

I remember feeling like that kid again, as a big intimidating lad was picking on me. I went over to one of the bar staff and said he wants a drink. I was told to go back and say I’m only a glass collector and you have to go to the other end of the bar.

“So I did and he started shouting and swearing at me. My boss told me to bottle up as he could see I was like a deer in the headlights.

“I went to the cellar to get the bottles and my boss came in and said to me, “if you don’t grow a pair and stand up for yourself you won’t last long or go far in life”.

“So I took this on board.

“The following Saturday I’m on my fourth shift. As I’m cleaning the glasses and ashtrays, through the people I see the guy from last week coming towards me like in a film and he’s on a mission.

“I still remember feeling fear and dread, as he approached he shouts again demanding a beer. To which I said “no you a*seh&le “.

“As soon as I called him that he stood on the rail which goes around the bar and goes to grab me. All I know is that what was a second or two feels like a lifetime as I grabbed the guy onto the bar using his collar.

“I held him down. The owner and some of the local gangsters were looking at me. I wanted to cry.

“They all look at me and start clapping, two of them took the guy out the back.

“My boss said to me “I know I told you to grow a pair but no need to show them to the world “.

“All these years later and I still don’t know who he was. Since that night I’ve gone on to do other things, I’ve done things to bad people that I will take to the grave. I was known as Thor before the comic movies made him and his hammer popular again.

“I’ve had times where I haven’t slept at night for fear of retaliation and thankfully I’ve only had one occasion where trouble came to my family house.

“Three lads in a car tooled up, but I got an anonymous call and was waiting for them. As soon as they pulled up, turn the lights and engine off, that was my cue. I jumped on the car bonnet smashing the window screen. “They were screaming and shouting in the car, not one got out. We got at least 100 yards down the road before I was flung to the ground, as they made a quick retreat. “I’ve had several shot guns, sidearms and even air rifles pulled on me and I’ve lost count of how many knives. But times have changed now, I had to earn my respect and my stripes. Nowadays everyone is carrying a weapon thinking fear is respect.

“I’ve taken a lot under my wings over the years, showing them a better life and positive future.

“Coached them and taught them and showing them the difference between fear and respect.

“I’ve been known as several aliases over the years, but one thing people know me for is when we meet I give them respect.

“If you lose my respect you learn a valuable lesson on how hard it is to earn it back.

“My last run in with knife crime was just before Christmas 2018. A young lad about 20 reaching into his pocket as approaching a door supervisor in a bar. I waded through 12 people before placing the lad in a  submission hold, taking him down and successfully restraining him. The door supervisor thanked me and the police took the lad away.”

We carried on chatting for ages. What was supposed to be a quick drink turned into hours.

We are meeting up again soon to discuss his anti-bullying, suicide awareness and anti knives campaign, now that he’s living the quiet life.

I know he’s always had zero tolerance for drugs and I’m looking forward to see how we combats this with pubs and bars in his local area, as the local council don’t seem to be doing anything to tackle the negative night life in his town.

All I can say is this lad has been through a lot in his life and he carries on looking after those who need it.

I can’t wait to see this next chapter of his life, until then I suppose I should end this by saying to be continued…

I have no right to call myself mummy any more... same-sex couple's break-up sadness 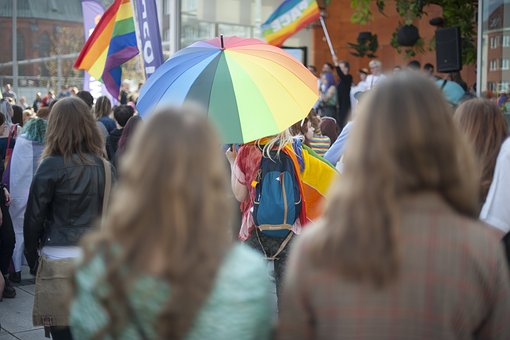