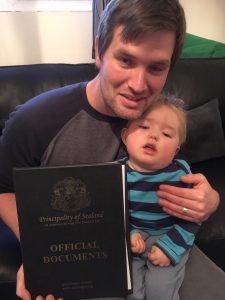 Jackson Garwood, aged four, has a rare terminal illness … but his dad is determined that his memory will live on.

The book’s heart-breaking intro says: “”By day, a rare disease limits his ability to move freely, but at night he is far from grounded. When the sleeping hours come around, and weightlessness takes over, Jackson takes to the skies. He knows what it means to need the support of others, which is why when he hears a call for help, he is quickly there to lend a hand.” 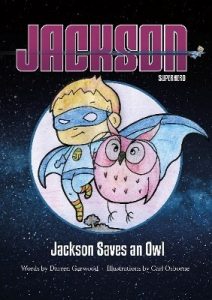 And sadly at the age of one, he stopped using his arms and now needs constant care.

Mr Garwood, from Tilbury, Essex. hopes that seeing the book in shops will help his one-year-old daughter remember her brother.

He said: “Our lives came crashing down when Jackson was diagnosed, I tried to blank it all out. I decided from that to write Jackson Superhero – he might not be able to do much – the condition affects everything including his brain – but I can help him dream by reading to him,” Darren said.

Jackson has also become a Knight of the realm of Sealand, which is classed as the smallest country in the world.  The Bates family governs the small State as hereditary royal rulers, each member with his, or her, own royal title.

Take that cancer! The bald truth of fighting killer together