Andrew John Teague, co-founder of D.A.D.S, and parents from across the UK are to march on No 10 and the Houses of Parliament this week in a protest aimed at forcing a change in the UK towards parental alienation.

The walkers, mainly dads, some who haven’t seen their children for years, have been practising hard for the marathon and many are expected to walk more than 200 miles in just a few days.

But Andrew estimates he will have walked more than 500 miles by the end of his march.

Last week he walked the twenty miles between court houses in Swansea and Bridgend to raise money to have an educational DVD on parental alienation made for schools, local authorities and courts across the country.

However, the London march is the culmination of a year-long campaign by the 20,000 members of D.A.D.S and other groups in the UK – and across the world – to get the syndrome recognised as a criminal offence.

Still nursing the blisters from his Welsh walk, Andrew said: “Changing laws doesn’t happen overnight, it takes time and sadly its our children who suffer.

And on September 5 their biggest protest is about to take place.

Andrew said: “This week I will finally set off for London – and many others have said they will also set off walking from other parts of the country at the same time. The idea is we all converge on the capital and peacefully make our point.
“Because of various restrictions I have to head up through The Valleys, back down through Ross-on-Wye and then into Oxford. I’ll be averaging 40 miles a day – and judging by the blisters I got walking from Swansea to Bridgend, it could be agony.

“But I won’t give up, we are marching for our children, for parents, for grandparents, for families and for those we call Anon, who took their own lives because of the stress of and unfairness of parental alienation.

“I will arrive in London on September 5 come hell or high water and hundreds of us will gather for the last leg when we march on No 10 and Parliament. This is a walk for  our children future. Money raised will be to help our children through educating schools and contact centres.”

The new DVD will focus on the damage parental alienation has on the minds of children.
Andrew said: We have got some of the UK’s leading experts in parental alienation on board and they are helping us in many ways but one of the main focuses at the moment is to get this educational video made so we can tell those in power in their own homes and their offices exactly what this awful syndrome does to our children.

Key points along the route:

6 thoughts on “The day the ‘alienated’ march for their children”

Blistering good day as Andrew gets lost – but 37 miles and still going! 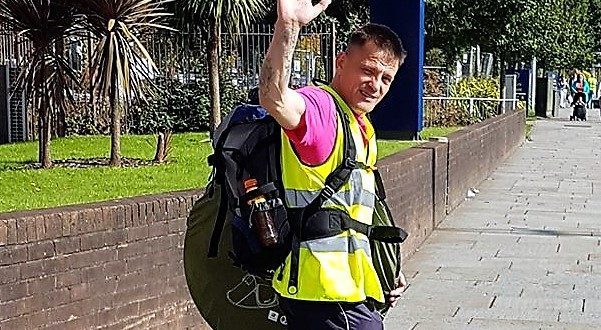