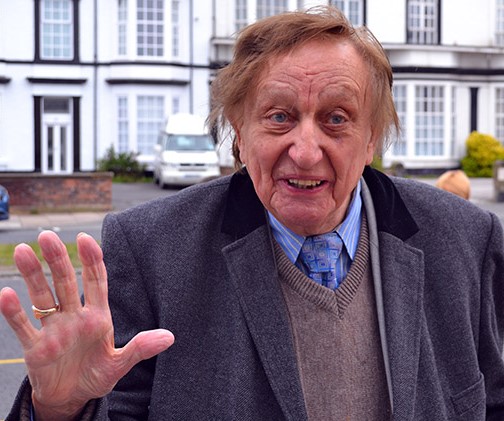 When I was a ‘rooky’ reporter on the local Chester ‘rag’ in the late 1970s I was dispatched to a village hall on the outskirts of Ellesmere Port to cover an afternoon comedy performance by Ken Dodd.

It’s that long ago now I can’t really remember how the show went – but it was definitely a lorra lorra laughs. I remember the predominantly blue-rinse brigade and retired bank manager-type audience roaring with mirth hour after hour.

Back then Ken was a bizarre sight to behold, wild spiky hair and goofy teeth, ill-fitting suit, dusty loafers and tickling sticks.

The Diddy Men added a surprisingly lysergic atmosphere to the wood and shingles hall at the end of a narrow country lane. Ken’s Rolls Royce – I seem to remember it as chocolate brown – waited like a patient old dog on the gravelled drive.

But it was his unbroken stream-of-consciousness jokes which marked him, not as an out-of-date has-been despite the mature middle class-ness of his audience that evening, but as a surreal comedian with an almost psychedelic madness.

Back then he had found a form of cult status on the tail end of hippydom and yet still had staunch followers among the semi-detached ‘squares’ in his audience.

When the show ended I waited by his Rolls for what seemed more hours – Ken was still entertaining the crowd, shaking hands, telling jokes, poking fun and laughing fit to bust.

Finally he was there shaking my hand and grinning like a dray horse, you could tell he was preparing for another round of jokes and mayhem, but this time just for me.

Then I lit a Benson and Hedges and as I exhaled the blue-ish smoke everything changed.

The horse-face of humour crumbled  and  I saw the real tragedy behind the comedy.

Everybody seemed to smoke back then but Ken Dodd was having none of it.

He berated me for smoking and asked me why I did it?

I told him it was simply that I enjoyed it – really, it was because I was addicted to doing what  everybody else did. We didn’t think about cancer back then.

But Ken Dodd did.

And there were tears in the eyes of Britain’s best-loved comedian as he told me: “Don’t smoke, it can kill you … and I’ve just lost somebody very close to me and she was too young to die.”

And so he told me about his long-term lover  Anita Boutin, who  had just died from a brain tumour.

They had been together for 24 years.

He told me she was just 45 when she died … they had been engaged for two decades and he wept as he told me he wished with all his heart that he had got round to  marrying her. Anita had told a  reporter  previously who asked if they were getting married:  “It’s up to Ken.”

Anita was buried at their local church in Knotty Ash, the same one where Ken’s mother was laid to rest  eight years earlier. Ken put flowers on both  their graves every Christmas.

His relationship with former Bluebell Girl Anne Jones – whom he married just a few days  before he died –  began in 1980. They had known each for many years. They were in Dick Whittington at the Alexandra Theatre in Birmingham when they fell in love.

It was only a brief moment in my life – I was 20 years old at the time – but it is a memory that’s never gone away.

Ken Dodd had shown me the real tragedy behind his mask of comedy and had handed me my first revealing celebrity interview.

But more than anything I had met a man who genuinely cared about people and their lives.

Did you ever meet Ken Dodd? Tell us your stories here https://www.consumerwatchfoundation.com/send-us-story/