The blind Bulgarian clairvoyant who is said to have foreseen 9/11 and Islamic State’s rise apparently told Barack Obama that he would be the ‘last president of the United States.’

Baba Vanga made the predictions before she died in 1996 when she was 85. The pensioner is said to have  predicted that the 44th President would be African-American.

But it’s unclear what the Bulgarian-born seer, who had an alleged prediction success rate of 85 per cent, meant when she said Obama would also be the last president,  Obama technically remains president until Donald Trump is sworn in on January 20, 2017.

Baba Vanga prophesied that the 44th US president would be black and he would be ‘the last one’. She said  that at the time of his stepping into office, there would be a major economic crisis.

Vanga is said to have made hundreds of predictions in her lifetime, including   there would be a ‘great Muslim war’ which would start with the Arab Spring in 2010.

Meanwhile, The Simpsons predicted that Donald Trump http://www.dailymail.co.uk/news/donald_trump/index.html would become President of the United States back in 2000.

The reference to Trump first appeared in an episode called Bart To The Future. The cartoon’s creator, Matt Groening, said: ‘Trump was of course the most absurd placeholder joke name that we could think of at the time, and that’s still true. It’s beyond satire.’

And finally, did the Buchan Observer in Aberdeenshire treat the election of Trump to be the world’s most powerful man with the lack of drama it really deserves when it published this headline:

Donald Trump, owner of Trump International Golf Links at Balmedie, has been elected as the next President of the USA.

He has visited the area on several occasions, the most recent being earlier this year.

Mr Trump is half Scottish – his mother Mary MacLeod being from Stornoway on the Isle of Lewis. She grew up in a simple croft until she landed in Manhattan at the age of 20 and her first language was Gaelic.

When was America ever really great, Mr Trump? 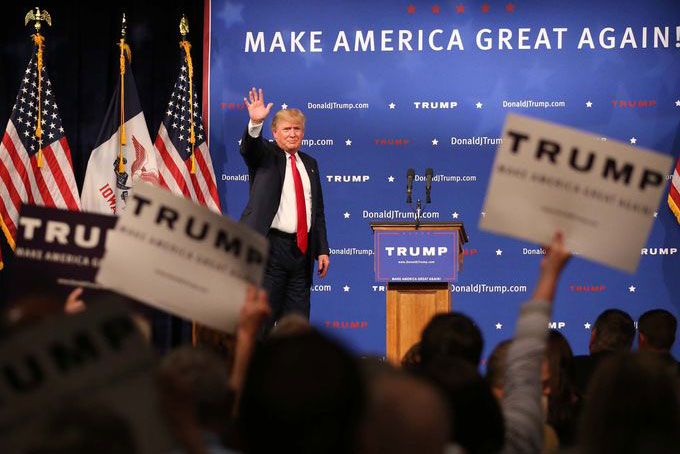