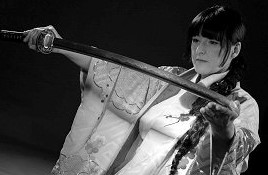 I started  my company Goodmedia to use my creative energy to express love, passion and healing. I believe creativity can  change and protect lives.

My vision is to help enlighten every man, woman and child, show them how they can use their inner Samurai spirit to embrace prevention.

Quite a task! But if we do not visualise our dreams on the top of the mountain how do we dare to start climbing in the first place?

I have been privileged to meet some incredible people around the world in most walks of life. From music and film celebs to primary school children – we all have our stories to tell and creations to share.

I do believe in laughter and having fun … but of course life can be very difficult. So how can we find positive ways to deal with those hard times to ensure we can enjoy the good times?

Having enjoyed practicing martial arts and composing music from an early age, I felt the benefit of these in my life.  Both are key drivers in everything I seek to create.

So it may come as no surprise that I embrace the Samurai code! This includes seven virtues which portray our inner principles of life namely:

All our film, music and animation have these core values and build on our ethics of:

We can learn so much from each other, especially when we share inspirational stories.  Film, animation and music are the avenues through which we open hearts and minds. Do we want to change the world?

YES! For the better.

Goodmedia are in a very unique position regarding their film and documentary products. They are able to compose, produce and record in-house music thanks largely to the musical talents of Fay Goodman and Mark Wolski. they joined forces in the 1980s to form band China Doll with subsequent releases on indie and later major record labels.

One live band performance was transmitted live to China in celebration of the Chinese New Year – an audience of over one billion people! Classically trained, both Mark and Fay have written music embodying folk and ethnic scores, through to orchestrations with the likes of Royal Philharmonic Orchestra and currently, Orchestra of the Swan. They have recorded with well-known artists including members of Pink Floyd, The Stranglers, Rick Wakeman, Paul Weimar (saxophone, David Bowie), Gordon Giltrap and others.

Music is at the heart of everything! 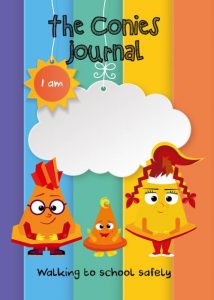 The idea for The Conies was born following Fay’s frequent visits to Japan and various other countries. She was intrigued by the different colours and variations in traffic cone shapes. She imagined these iconic figures coming to life and becoming a focus for helping in road safety. Visualising a cute family of cones assisting children’s road safety was a particular spotlight for Fay….and for good reason.

In 2013 insurance giants Axa published a report drawing on over six years’ data which showed that 85,814 UK children were either killed or injured on roads within a 500m radius of schools, the equivalent of 1,190 a month. Even worse, since 1987 child road fatalities and serious injuries had been on a steady year by year downward curve. That is until 2011-2 when figures started an alarming rising trend. A number of factors have been cited but mostly the huge growth in volume of cars and other vehicles in the past 30 years.  But also Governments cuts to child road safety campaigns and TV ads. Dept. of Transport budget campaigns for school children were £19m in 2009, down to £3.9m by 2012, and zero in 2014. Gone were the wonderful safety heroes a whole generation were bought up on – The Green Cross Code Man, Tufty the Squirrel. These were heroes that children followed, and more importantly, learned from….but were no more.

Indeed, 28th Sep 2017 the Department of Transport published their latest road accident figures confirming this disturbing upward trend. They showed that 69 children (an increase of 15 from the previous year), were killed on our roads in 2016, the highest figure since 2009. Clear evidence showing annual figure for child deaths and serious injuries on the roads has been rising in recent years. One of the key reasons is that Government road safety budgets for campaigns have now been reduced to zero. Campaigns that educated a whole generation of children (and adults) no longer exist. Gone were the wonderful safety heroes a whole generation were bought upon – The Green Cross Code Man, Tufty the Squirrel. These were heroes that children followed, and more importantly, learned from….but were now no more. We decided to take the bull by the horns to tackle this relinquishment of State responsibility, through our initiative. Indeed, at our Conies launch in 2017 Deputy Crime Commissioner for WM Police Ashley Bertie described our work as crucial to the safety of all children.

We took the ideas of a family of cones and started the long laborious journey of creating animated characters, mummy and daddy plus children and a baby – even a moo cow! So The Conies were born, new safety heroes of the road for children – a family of animated anthropomorphic cone shaped road signs, who come to life and share their road safety adventures with children. We produced our first animated short film and started developing child lesson plans in conjunction with local schools who helped us evolve our ideas and visual safety messages.

Correspondingly, West Midlands Police and Crime Commissioner David Jamieson was aghast at the troubling and rising child road casualty statistics and was investigating various avenues in tackling these worrying trends within his region when it came to his attention that in Birmingham there were, at last, safety heroes busily at work saving children’s lives. They were called The Conies!! A phone call, meetings and a safety strategy was developed through the Birmingham Community Safety Partnership which comprised WM Police, fore service and various safety oriented associations. We were commissioned to develop and write a school child’s road safety journal with a lesson plans journal for teachers, adorned with fun games and characters that would raise children’s knowledge and confidence when on the road. In March 2017 over 3000 journals were distributed to 27 schools together with Conie pencils, snap bands and more goodies for kids. The resultant return of questionnaires revealed teachers returning an incredible 100% positive feedback from children, more than we ever could dream of. The schools were located in high child accident areas of the city. A resounding success. Our bright animated characters were an instant hit with children who loved the Conie family and games.

In January 2018 this led to a second pilot in three other tough areas of Birmingham, this time to 71 schools representing 5500 children. The result? Again, overwhelming success with teachers asking for more journals. They simply could not have enough. Unfortunately, because of our success, demand outstripped supply. But, as in all good happy endings, staff recruitment giant Pertemps Education Network came to our rescue and have now funded a print run for an extra 25,000 copies!

Together with school resources our creative team have been busy designing Conie board games and animated stories, the first of which, Cone With the Wind

has recently been released for viewing. The themes explore and teach safety issues with a wider remit than road safety. But are relevant to child safety and wellbeing. Cone With the Wind follows the story of a bumble bee and The Conie family in which environmental respect and safety are learnt outcomes – dangers of dropped litter, our impact upon the environment and wild species, air quality and more.

With The Conies growing and growing we have embarked on a program of recruiting personal safety experts who can help teachers deliver these courses to their schools. We now look forward to reaching nearly one million primary school children in the whole Midlands region, followed by a national platform as the next step.

Riches to rags… how the Lady could become a tramp