Well, it happened. His Royal Bobness did indeed supply an 11 line poem to be read publicly at at the Isle of Wight’s major convention to mark his appearance there fifty years ago.

And this is despite the fact  the Isle of Wight wasn’t one of Bob’s most memorable hours – and some would say it was a part of his career many would like to forget.

Not only was it his first real live performance since 1966, it was supposed to be an inspirational  family holiday to the heart of Tennyson country, a midnight outing for his new crooning country voice and a public revaluing of his once incendiary, but now fizzling, career.

Sadly, very little went right … his son, Jesse, was taken ill on the cruise from the US and Dylan and his wife, Sara, were advised to get him to hospital, as soon as possible.

At the same time America was spooked because their wayward son had dumped them for a field in a farm in a place called Wootton.  Bob had basically crapped on his own doorstep in Woodstock…

But Dylan appears to have good memories of it… However, none of them came out in the poem, apparently.

It was in fact called Echo of the North Country and talked about Dylan’s teenage sweetheart Echo Helstrom.

Echo Helstrom Casey, from Dylan’s hometown of Hibbing, is said to have been Bob’s first real girlfriend viewed as the inspiration for his 1963 song Girl From the North Country. She died in California aged 75 in 2018.

Maybe he had chosen the Isle of Wight-remembered Million Dollar Bash event to eulogise her.

But like anything to do with the grand master of pop, folk, blues, rock and country convolutions, Dylan’s gift has sparked a strange reaction. This one bordering on paranoia as organisers – who say they had the right to read the poem at the event – now claim to be worried about copyright and fear they might get in trouble if they make it public.

The consumerwatchfoundation.com was expecting to get an exclusive preview of the words but it was cancelled as these doubts set in.

All that has been released are these partial lines, “hard ‘n tuff old land…like folks who live there” and one describing Echo as “sweet as celandine flower” – in other words, like a buttercup.

However – we publish what purports to be a hand-written transcription of t the poem here. We are not sure who copied it down, but would be good to hear from them!

The poem was read out by Ashley Hutchings MBE, the founder member of Fairport Convention,   during a set by Dylancentric, a band assembled especially for the Bash.

As the last line of the poem drifted over the crowd, Dylancentric’s Ruth Angell started singing the Dylan song with almost the same title.

Julie Felix was there too with folk-rock legend Richard Thompson. 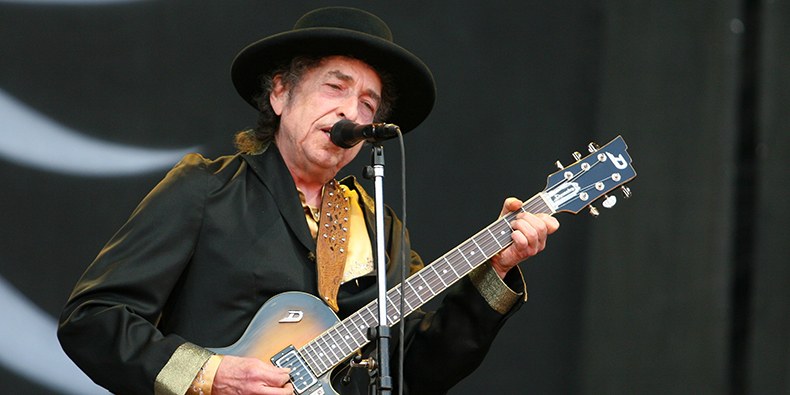