This is what authorities in Torrevieja fought for more than a year to turn off – the music of the beaches.

Thousands of Brits and Spanish music lovers were shocked last year to find that iconic beach bars in Punta Prima on the Costa Blanca were closed without warning after a decade of music in the sun.

But in recent weeks the music has started to come back … bands including the BLUE WAVES have started appearing at the SUNRISE BEACH CLUB, Playa Flamenca again and ex-pats have been flocking there to dance in the sun.

One ex-pat said: “It’s almost like a homage to the open air concerts of the Sixties – and many who attend now remember them! Every week you see a steady flow of middle-aged music fans heading to the venue. There’s never any trouble and  everybody just has a good time.”

And now reports say that Orihuela Town Hall has announced that the Central Administrative Court for Contract Appeals has turned down two appeals which have been holding up over new beach bars.

The councillors in charge of beaches, Luisa Boné, and contracts, Sáez said this was a positive decision by the court. 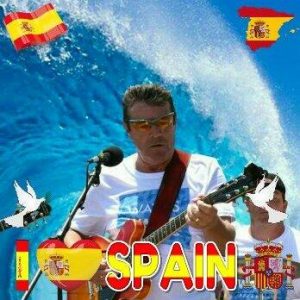 But it wasn’t only the music that was over – pet owners lost part of their social life because the three bars were a focus for dog walkers.

Already the Brits had been denied Spanish language, flower arranging, dancing and Bridge classes at the Astoria restaurant ten minutes walk from the bars when they were closed down under new management.

Thousands of ex-pats from the UK, Scandanavia and Russia have been flocking to the area since the early 2000s attracted by the weather, the low cost of living and house prices that hit rock bottom after the banking collapse of 2008.

Before that the area was a relatively unknown and used mainly by holidaying Spaniards from Madrid and Barcelona.

Punta Prima itself is a 20 minute walk from Torrevieja which, until tourism took hold, eked a living from  fishing and salt-mining. It is now famous for its pink and green salt lakes.

One woman, from Edinburgh, who also didn’t want to be named, said: “This is a wonderful place, the climate and weather are fabulous and the  ex-pat and Spanish get along famously.

“But it was a bit dull, so a few years ago people got together with some musicians living out here and began playing live music on the beach. Almost immediately people began to come from all over to enjoy it and have a good time.”