Police are investigating after water company engineers said they never wanted to return to work in Britain’s Village of the Damned.

The workmen who were employed to update old Victorian water mains in the ancient Staffordshire leather-working hamlet claim they have been abused, photographed and threatened by home owners.

There are also rumours of a worker being threatened with a gun and another about five inch nails being dumped across the road where traffic has been diverted.

The GMB union and Severn Trent Water are also investigating the claims. 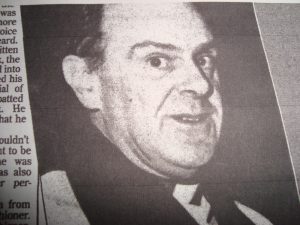 One engineer told a villager: “I never want to return here again, our life has been made a misery by those we are trying to help, it’s like returning to the Dark Ages.”

Another claimed: “I’ve even had a bike driven along the pavement at me and it’s only because we have had to close the road on a daily basis.”

Severn Trent Water Authority is carrying out work to replace out-of-date infrastructure after almost 2,000 HGVs a day started using the once idyllic village of Woodseaves as a rat-run to avoid Stafford town centre.

Road campaigner Leigh G Banks said the village has become an unofficial by-pass for the congested town centre leaving the real HGV route two miles away empty. This road ‘isn’t built for this type of traffic’ he said.

A spokesperson for Severn Trent said: “The road is closed so our engineers can work safely as we carry out essential work to the water network in Woodseaves. The local police are aware of some recent incidents and are investigating further.”

There have also been reports of theft of diesel from machinery left on the road works overnight.

The community was dubbed the Village of the Damned in 1990 by freelance journalist Robin Corry who went on to work in radio in Essex.

There had been a series of horrific deaths including the suicide of the local vicar, Roy Harrison, who hanged himself when villages accused him of being a paedophile.

Regarding the latest story of ‘everyday’ country folk, one villager wrote on Facebook: “Why are residents being so awkwardly rude to the workmen? I’m sure we all have jobs to do just as they have without people swearing, threatening and photographing them?!?!?”

But the villagers seem to thrive on in-fighting – last year the parish council wrote to Leigh, a journalist and broadcaster, demanding he took down his website which is campaigning to get the thousands of 40-tonne wagons taken off the road. They complained that his site was stopping houses being sold.

Leigh said: “There are many many good people in Woodseaves but there is a
hardcore of village idiots who literally are out for a fight all the time. How can a website fighting to save the village be ruining it when people can’t sleep at night because of the thunder of articulated lorries?”

And in other incidents a local builder regularly had work disrupted on a small housing estate because of a neighbour who constantly reported him to the council. The same man was visited by police after an alleged assault on one of his own neighbours. No action was taken.

In another bizarre incident villagers were furious when somebody stole one of their scarecrows which had been entered into a competition.

Natalie Clay Names were mentioned by the workmen but I’ll not humiliate anyone. I find it very sad and shocking of such a lovely community

Peter Thompson who runs the local shop said: The roadworks have certainly brought out the worst in people. They do not deserve the abuse and grief given to them.

Angela Sorry but I’m very annoyed!!!!!!! Why should this be a police job?? Aren’t our heroes busy enough? The twiits who “manAge” this project should have realised they needed to do more than put up a few paltry road closed signs especially as it seems most people can’t read!!

Mark Winnington, local councillor jen, presume the dig about Councillors was aimed at me. obviuosly the gentleman concerned does not realise I live closer to Wooddseaves than Gnosall and use both the A519 and A518.