Don’t get me wrong, I’ve always liked Italians. I was married to one for seven years. Had her children.

Maria Immacolata was a typical Italian, dramatic, noisy – prone to a little domestic violence – and, well, shall we say, expressive. Well, I have to admit, one day she expressed herself once too often and I left.

Her parents had emigrated to Britain when she was seven. Nonno, her dad, could turn his hand to most things and did over the next ten years before ending up in a factory.

Later he became Britain’s most unsuccessful ice-cream man. Fixed his van in the summer and tried to sell ice cream in the winter. A spin with as many twists as a Mr Whippy. But it just didn’t work.

So, he saw his days out cleaning the public lavatories in that great northern British town of Stockport. His family affectionately called him the Bogfather. See, Italian’s do have a sense of humour.

But it was no joke when I saw what he’d made his family leave behind in his ill-advised search for paradise.

The land that time forgot, that’s what … Lake Trasimeno, the heart of Italy’s Umbria.

This is where Maria Immacolata was born.

The countryside surrounding the lake isn’t the most beautiful scenery in Italy. But only a fool or a philistine would complain. The lushness is stunning and trees sway like a dawn chorus as the lake steams in the morning as if somebody is pumping stage-smoke across it.

Here, it is very much how we would like that green and pleasant land of ours to be – the Lake District with sun. Umbria could be Cumbria. Perhaps that’s why Nonno crept across the sky with his family in the late 60s. He must have believed it was a fair exchange.

Pudding and peas is still considered a delicacy in Ullswater – here they would treat a bit of cow in suet pudding with the contempt it so rightly deserves.

If you want meat and potato pie and chips, visit Stockport

But if you want the greatest food in the western world then fly to the Pasta del Sol.

And, yet food is just about one of the worst-kept secrets in Umbria.

How could they even try to keep a place like the Country House Montali a secret?

It’s described as Italy’s only gourmet vegetarian hotel. Well, who would expect that in a country that consumes millions of tones of meat a day.

Montali stands on a plateau at the end of a gravel mountain road and looks wistfully across the countryside.

It’s run by husband and wife Alberto and Malu Musacchio, an unassuming middle-aged couple who have lived in the area all their lives and think they have a vague memory of Nonno and his family making their ill-conceived oddessy.

Malu and Alberto stayed and have worked hard over the last  decades to develop a unique menu of vegetarian gourmet dishes. They call it ‘vegeterranean’.

The restaurant is plain but functional inside, with white walls and the perfunctory brick archway. The tables are anti-septically clean – but outside it is a whole new world with rose gardens and sun-kissed patios.

Well, as we discussed the inexplicable exodus from heaven by dozens of people in the area, more than 40 years ago, they fed me Vegetarian Carpaccio, thin slices of beetroot gently marinated with lemon, served with goats cheese, rocket, nuts and extra virgin olive oil.

That was followed by Parementie soup. The Main course was Parrmiggiana di zucchini with flan di porri al Marsala, a typical south Italian recipe of courgette served with a licks flan and Marsala wine.

Later that day I took a five-mile drive to Panicale, the village where Maria Immocolata was born. Still only 500 people live there. So why leave? It isn’t exactly overcrowded

As with many of the walled towns in Umbria Panicale. Tranquil, timeless and untouched by modern bustle, it is a land of custom and tradition, where life is simple and unpretentious.

But for the more sophisticated amongst you, there is the jazz festival at Perugia. And what about a visit to the international school of painting

Overlooking the Tiber River valley, Montecastello di Vibio and Todi are medieval hill towns in the province of Perugia. Here is the architecture and countryside that inspired Renaissance artists and later masters like Poussin, Ingres and Corot.

Beautifully preserved and still medieval, Montecastello looks much like it did 500 years ago. A fortress wall surrounds the tiny heart-shaped town. The village is now the school’s campus.

You see, no matter who you are, you’ve got everything you need here. Splendid isolation, the lake as clear as a glass of white wine, and the sun … and the skies. Timeless villages and the mountains and valley. Art and history and the school of old masters.

I swear as I sat in the evening’s peace I could smell Malu’s latest cream and pheasant-less concoction wafting down from his hillside.

Why did Nonno leave here? He had it all if he’d only known. Malu, who is from the same generation give or take a decade, stayed … and didn’t he do well! He became the godfather of vegetarian food.

Well, Nonno he just made it to be the bogfather.

Lazy daze: The pool at the country house – just the place to laze after lunch.

Staff of life: Food is a way of life for the staff at the country house – Malu and Alberto (seated front row) see to that.

Let's have a beautiful barbeque 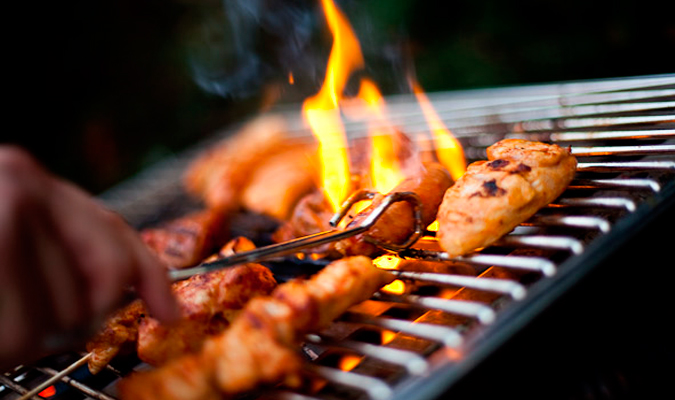