The creators of Peaky Blinders have sent a stern warning to a dim sum restaurant telling it to get a ‘brand’ new look.

The restaurant had chosen photos of characters from the hit TV drama as its recipe for success. The walls of the Manchester city centre bar are festooned with them.

However, the top crime drama’s producers say it “has no authorisation to use the Peaky Blinders television brand”.

Peaky Blinders was named after a gang that terrorised the streets of Birmingham in the 1920s. The fifth season will be shown on BBC One later this year.

A spokesman for Caryn Mandabach Productions and Tiger Aspect Productions said: “The bar has no authorisation to use the Peaky Blinders television brand, and in line with our strategy to manage such infringements, the owners have been contacted with a legal notice to cease and desist. 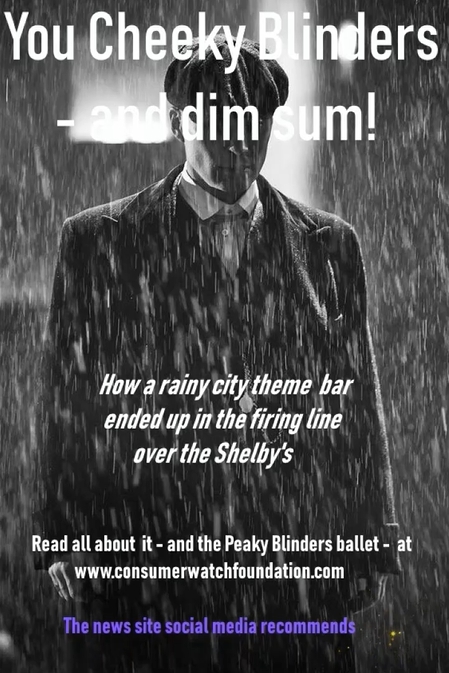 “We work hard to protect the quality and authenticity of the Peaky Blinders brand and work only with approved partners to ensure that the show’s dedicated fanbase receive quality experiences and products befitting the high standards of the show.”

The restaurant and music bar owners say they are fans of the Bafta-winning drama and “do not in any way intend on portraying ourselves as being affiliated with the show”.

They said in a statement: “We are a fan-based theme bar from the 1920s era. We base ourselves on the Peaky Blinders tradition of community spirit and togetherness with a feel-good factor. We are trying to create that image and that image only.

“If we have offended anybody, that is not intended, and for that we apologise.

Caryn Mandabach Productions has registered the phrase Peaky Blinders as a trademark for use in relation to television shows, among other things.

But an application by the TV company to trademark the name for uses relating to bars and other food and drink services has been opposed, according to the government’s Intellectual Property Office.

The Oscar-nominated screenwriter said the Rambert dance company had approached him with plans for a ballet based on the Shelby crime family.

Knight also told the Birmingham Press Club he is planning three more series of the drama and is lobbying the BBC to film more of the show in his home city.