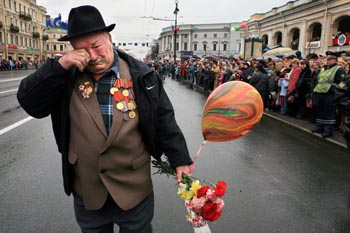 As US diplomatic staff  were moving out of the consulate  in St Petersburg, this photograph shows the true emotion of Victory Day in Russia.

This man walks away from last year’s celebrations in tears carrying flowers and a multi-coloured balloon. Victory Day 2018, in May, will commemorate the 73rd anniversary of the capitulation of Nazi Germany in 1945. The annual parade marks the Allied victory in World War II on the Eastern Front.

The mass ejection of foreign diplomatic staff came in response to Washington’s expulsion of  Russian diplomats from Britain and the US, an order made following the poisoning of  former Russian spy Sergei Skripal  in Britain.

The UK and its western allies in Europe and America say Moscow is behind the attack on the former military intelligence officer. Moscow denies it and now says Britain did it.

The picture was taken by Alexander Petrosyan, probably one of the best photographers working in Russia today. He was born in the Ukraine in 1965 but has lived in St Petersburg for almost half a century.

How do you think things will progress between us and Putin? Tell us your views below.

Send us your photos like this and help CWF stop the idiots who put OUR lives at risk...