I’ve been to Ireland  again, home to my blood city of Limerick, with diverts to Tipperary and Clare. As soon as my feet kiss Irish soil I feel rooted, my senses more atuned to all around me, more my true self.

I’ve nothing against Meddle England where I was born, other than parts of its past, because I have no reason to. But the spell of Irish blood, the music of her accents  and speech – especially those of Limerick and nearby – the lilt of her nature and her people seduce and caress like a curse no exorcist can dispel.

The water, the air, the peat fires and the innocent soil whisper “wherever you are, you’re mine and always will be”. I was only called Plastic Paddy once this time, and that by my cousin. Forgiven, so, but I’ll bate the face of her next time I see her. Don’t call me Paddy. My 65 other first cousins wouldn’t.

Things have changed year by year and I bet I’m as ambivalent about many of them as some Ireland-born must be too. Some things however don’t alter and I hope they never do.

I was walking the cousin’s dogs on an estate in southwest Limerick on the weekend and almost lost the terriers at the shock of seeing children playing in the streets and on the grass – with bikes, balls and writing on the pavements with stones and slates.

Further on, I heard the sounds of boys playing games on nearby fields.  This is barely witnessable in  southeast England where I live… keep those mobiles phones, X-boxes and other paraphernalia at bay for as long as you can.
xxxx xxxxx 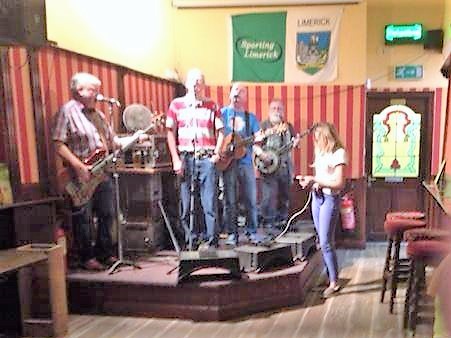 The same can’t be said tech-wise in other environments. Two of my cousins form half of The Limerickmen, the resident band at Brendan O’Brien’s bar in Roches Street, Limerick, on weekends.

I’m now up to four tunes they’ve dedicated to me over the years: The Lonesome Boatman, The Water is Wide, McAlpine’s Fusiliers and My Heart is in Ireland. On the first night after I’d landed they were in full flow when a blonde  sauntered to the stage to slide her phone into one of their plugs to charge it. One of her friends copied her.

For an encore, the blonde, in the middle of a tune, mind, walked to within inches of the band and tapped out a lengthy text.  She could have texted and moved in time with the beat, at least.

The day before my departure I went to The Crescent, the biggest shopping centre in the country outside Dublin. It has a library where I imagined I could print off my Ryanair boarding pass.

I failed to find it so wondered in to an office type place and approached reception for directions. “It’s down there to your right at the end. But it’s closed on Mondays because it opens on Saturdays.”

I laughed. “Didn’t anyone think to open on Saturdays and Mondays by shuffling the work rotas a bit?”

“Apparently not,” she smiled.

“Plan B, then. Is that a printer behind you?”

“I don’t suppose you could just, you know …”

I don’t know whether to blame progress, Ryanair or the Pope.

One of the neighbours, Pavel the Pole, came to the rescue. If you want anything done, ask an immigrant.

I only got to drive down the first of them and gave a fist pump as I saw two horses munching on grass or strolling down the street as in the 60s and 70s.

My nana’s house was on a street leading off Hyde Road in Ballinacurra Weston. I lost count of the weeks I spent there in my youth.

When I was 12 in 1971  I was chatting with her  nana in her bedroom while she was whispering her novenas.

I said I did but preferred it here.

She smiled. Then she said: “One day, Ireland will rule England.”

“But nana, Ireland is poor compared with England and England has a population of about 50 million; Ireland three million or so. Doesn’t make sense.”

“Numbers?” she said. “Son, numbers have nothing to do with it. Isn’t it a good job Churchill and the RAF didn’t think that way in the war? No, son. It’s about the will and who’s right and who’s wrong.”

Which is, fractionally, why I voted Leave. Begob, here’s my plane.

It's a new year and Jozef Palenik explains why he came home...