Hello to young and old,

I’m back in this virtual cafe and began to think about the changes  there have been over the years in my reality world. This encompasses the suburb, no, the village, I have lived in all my life.

Village? Well, there is a sort of village green with a big tree, overlooked by two Victorian pubs and a large Catholic Church built a few years later – then there is The Lane, about half a mile long which was sided by small shops offering tailor made suits, fresh fish, haberdashery.   You could find an outlet for any single thing on The Lane.  Then there was the great natural park, with streams, a lake, drinking fountains and peacocks strutting.

Gradually there was a cotton mill where my mother and grandma worked, and rows of terraced houses, each with its own outside privy.  Maybe we were a Mill town?  But above all we were a community.

The years saw a dance hall emerge over the Coop, two tall, grey looming Elementary schools and later a Grammar School, and of course a cemetery. Trams were up and down the lane.  But our milkman’s horse still ate my dad’s privets every morning and the coalman had his own sturdy horse and cart.

Our Town proved it was a real community during the Second World War. Some of the men who weren’t called up joined the ARP (Air Raid Precautions) and got a tin hat and a small torch for the black out nights when the the bombs were falling. The mums and grans and the children were under the earth with the worms and black beetles in the dark, dank Anderson Air Raid Shelters.

Still a community after the war in the days of rationing and austerity.  Sometimes eight brides would wear the same carefully altered wedding dress on their big day, because clothes were still on ration.

Most of us went to work at fourteen.  I met The Spouse when I was an office girl in a Plumbers and Builders office.  He was an apprentice.

My mum and dad had a Ford 8 in the drive of their detached house which they had bought in l937 for £465.  Still paying the mortgage though.

Marriage, a baby, homemaking.  The Spouse after work refurbishing an old dilapidated house we were buying.  Then we had a l2″ black and white TV delivered.  Hard times, good times.

The Lane was looking less alive as shops closed.  Two supermarkets  had taken over their trade.  Boarded up for a decade and then as the world became smaller and smaller some of the shops re-opened as people from other lands made them into businesses.  Where there had been failure, they made success.

Yes, here and now our planet has shrunk.  Our families move to countries like India, Australia, America.  A new life.

Ours is a new type of community where Northern Accents are tempered by voices from far and wide.  A Sunday walk in the park, to the lake, the boathouse, to feed the ducks, is brightened by costumes from Africa and Asia’;  The laughter is the same, we are all calling our children to us in different languages, eating ice cream, seeing the tears and hearing the yells when the toddler falls over.

It’s the same world for the Spouse and I, the same reality. Our community has broadened.

Our Town – the story of YOUR lives 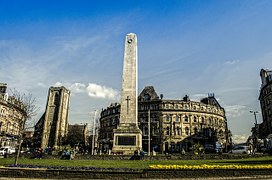