At least 10 million died in the mud, the blood and the smoke of the battlefields.

The economic damage was outrageous too – Germany spent more than £60 billion on taking on the world and by the end of it all Britain alone was £2bn in debt.

The only swollen pockets were the pockets of  isolationism and protectionism left behind by the Great War.

To this day nobody can really say what was actually achieved by all that destruction, although many new heroes posthumously entered our history books.

There was, however, something else too that came out of the smoke, something which was to ultimately battle on for true pride and dignity.

And that was Czechoslovakia.

It rose in 1918 from the rubble left by the collapse of the Austro-Hungarian Empire.

U.S. President Woodrow Wilson, among others, helped form this independent country as the Habsburg, Russian, and Ottoman Empire  were brought to an abrupt end.

Nationalism had been their driving force and nationalism was of course a significant cause of World War I.

Before the creation of Czechoslovakia the rest of the Western World only had a vague, if romantic, idea of the Czech Lands …  all they saw was Bohemia and the exotic spice roads, trade routes and wild horsemen bristling with pride.

Slovakia on the other hand was part of Hungary and seen as mysteriously rural, a land of castles, costumes and horse-drawn carts.

But while neighbouring  Yugoslavia slipped into a dictatorship within a decade of the war,  Czechoslovakia remained democratic until the end of the 1930s and was busy tightening the nuts and bolts of its industrialisation.

Beyond its first half century though it was to live through oppression, heartbreak, brutality, invasion and fear. History as chequered as a flag.

Today though the Czech Republic and Slovakia have come out of the political dark ages  and are celebrating the  anniversary of the founding of the umbrella which ultimately sheltered the burgeoning new order.

And now art and music  beauty and food and positive politics are the foundations of its year-long celebrations.

Leading Slovak and Italian operatic soloists have performed together  and the biggest international festival of contemporary art in the little big country was held in Bratislava.

The Labyrinth of Czech History too was given a major run at Prague Castle – it  contained Přemysl Otakar II’s funeral insignia, the Golden Bull of Sicily (granting royal rights to Bohemia) and documents relating Charles IV and Rudolph II.

In an eccentric celebration Czech pilot Roman Kramařík flew around the world in a small Cessna air-plane. It took 46 days and the one-time aerobatic pilot crossed three oceans and three continents, covering over 40,000 kilometres.

And there was, two years ago, even a three days of  what was described as ‘burger madness’ – 30 types of  burger and specialist beers from Europe and America.

It’s not that life has become one big holiday here after all these decades but Slovaks actually enjoyed an extra day off  to celebrate a while.

Parliament approved the proposal to declare October 30 a national holiday.

And there has been recognition of innovation and vision too … Dr Jan Telensky, majority shareholder in AquaCity-Poprad, Slovakia, described as the world’s greenest hotel, received an award from the Czech and Slovak embassies in London to mark the centenary.

The award was a major element of a day dedicated to the development of the bilateral Czech and Slovak relations with the UK.

As Brexit stumbles and creaks, relationships with Central Europe are being viewed with importance.

Dr Telensky was born into a Prague family with a military background and  in 1968  the thunder of  the invading tanks and troops of Operation Danube forced him to go to ‘war’.

At barely 18 Dr Telensky had to flee across Europe as Soviet Union-led Warsaw Pact troops invaded Czechoslovakia  because Russia  saw his ‘hometown’ as a hotbed of Western dissidence.

Dr Telensky put it this way: “When I finally I could return I was deeply disappointed by the consequences of decades of communism. Something  had to be done and I  dedicated myself to the transformation of the region and I am very proud to be part of her progress.

“I believe in the tremendous potential of Slovakia and  its role in the future of Europe.”

And that simple sentence, in its own way, highlights one of the most important changes in the last century – how these two grand nations finally stepped out from under the black umbrella and faced the world as ‘standing men’, a Czech Lands description for hero.

Does bearing your chest over parental alienation brand you a football yob?

Mon Oct 28 , 2019
Part of an international fight to change attitudes over parental alienation has been described as thuggish and likened to football hooliganism. 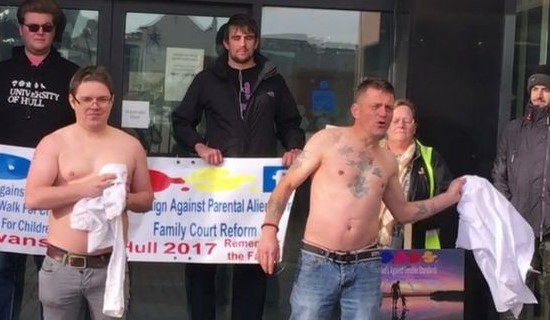